Since 1995 Dave Young has been gently tweaking the knobs of reality, trans-muting found, used, discarded and recycled materials into strange and unexpected new forms. He has worked as a sculptor, animator and film-maker, junk alchemist, blacksmith, metalworker, pyro-technician, set-builder, puppeteer and workshop leader.

Dave works closely and collaboratively with many other artists, dreamers, makers, musicians, performers and like-minded reprobates.

Since December 2008 he has formed a close relationship with Macnas in Galway, Ireland, working with Artistic Director Noeline Kavanagh and her team to develop new styles of work for street theatre, procession and outdoor performance.

Dave has also collaborated with fire and pyrotechnic specialists pa-BOOM, working closely with them to create projects such as Hot Heads.

He is based in West Yorkshire, UK.

Mutation: The process, or an instance of change or alteration

Trans- (prefix): Across, beyond, through, on or to the other side of, into another state or place 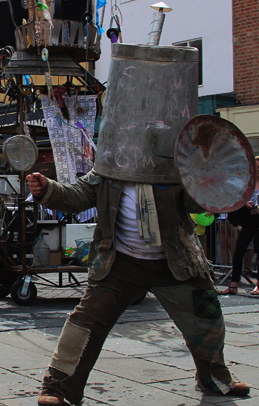 Photo of Dave, in full health and Safety clobber